South High School Rebel Robotics Team #2638 is the proud recipient of an Optimum Innovator Award and a team sponsorship from Optimum, totaling $3,000 in funding for the 2022–23 school year.

This year, Optimum Innovator Awards were presented to 15 robotics teams in the categories of inspiration, community, inclusion, technology, and social media. Rebel Robotics was selected as the winner of the Community Connections Award, which celebrates teams that successfully utilize their skills and knowledge to connect with the community and serve others. A $2,000 award is distributed through the team’s FIRST Robotics Competition account for use during the 2023 season.

Additionally, Optimum announced that Rebel Robotics has been added to its list of 40+ sponsored teams for the 2023 season, which includes an additional $1,000 in sponsorship funding.

“Rebel Robotics is thrilled to partner with Optimum,” says lead team mentor John Motchkavitz. “It’s always great to see the efforts of our hard working and dedicated students recognized by others.”

Optimum Innovator Awards recognize team accomplishments outside of FIRST competition events over the past three years. This annual award program is open to FIRST Robotics Competition (FRC) teams in Optimum service areas. Applicants provide summaries and documentation outlining their success in a particular category, and submissions are rated by a panel of judges from Optimum based on the criteria for each award. 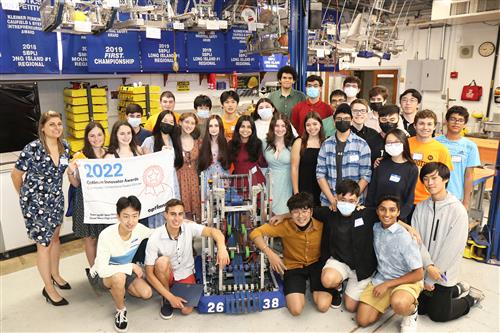 At the Rebel Robotics year-end celebration in June, Optimum representative Allison Aylward (left) announced Rebel Robotics as the recipient of the Community Connections Award and an Optimum sponsorship, totaling $3,000 for the 2023 competition season.