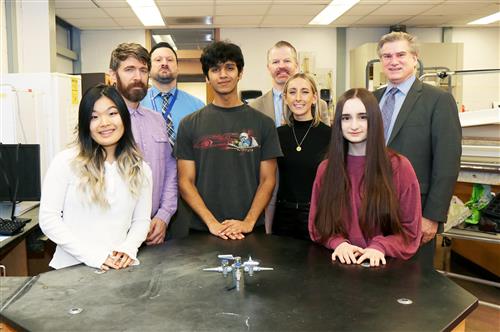 Three South High School students have been named 2023 Regeneron Science Talent Search (STS) Scholars. Dana Kagan, Amit Saha, and Amber Sun are among 300 students to achieve this honor in one of the nation’s most prestigious science competitions.

Great Neck’s three Scholars are among 300 semifinalists nationwide, who were selected from an applicant pool of 1,949 high school seniors. Each Scholar will receive $2,000, with a matching amount for their schools. South High science research teachers/advisors are Nicole Spinelli and Dr. James Truglio.

Dana Kagan’s project is titled, “Employing CRISPR Cas9 Editing in Combination With DNA Polymerase To Correct the DELTA F508 Mutation of the Cystic Fibrosis Transmembrane Conductance Regulator Gene in HEK293T Cells.” This study utilized CRISPR Cas9, an RNA-guided enzyme, to precisely target a specific region of DNA in order to correct a genetic mutation associated with cystic fibrosis. This method showed higher percentages of correction as compared to previous studies.

“We celebrate this year’s scholars for their exceptional work and unmatched motivation to use the power of science, technology, engineering, and mathematics (STEM) to make a meaningful mark on the world,” said Christina Chan, Senior Vice President, Corporate Communications & Citizenship at Regeneron. “We commend the scholars’ inspirational and thought-provoking projects and look forward to what the future has in store for each of these budding innovators.”

The Regeneron competition is the former Westinghouse and then the Intel Science Talent Search. The Talent Search, begun in 1942, is the nation's oldest, and often considered its most prestigious, science and mathematics competition for high school seniors. It is owned and produced by Society for Science. On Jan. 24, 40 of the top 300 Scholars will be announced as Finalists and will advance to the national competition.