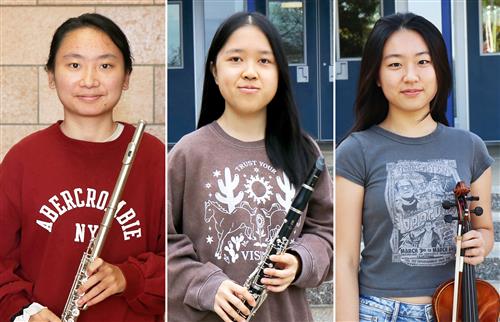 Three musicians from the Great Neck Public Schools have been selected to perform with All-Eastern Honors Ensembles, sponsored by the National Association for Music Educators (NAfME). Shuyuan (Julie) Sun from North High School, and Joy Song and Dayoung Yu from South High School, are among the top student musicians in the northeastern United States to be chosen for these prestigious ensembles.

Flutist Julie Sun has been selected to perform with the All-Eastern Symphonic Band. She is a two-time selectee into the NYSSMA All-State Festival, where she played the flute with the Symphonic Band. Her music teachers at North High are Dr. Esther Noh, orchestra director, and Jacqueline Tomlet, band director.

All-Eastern Honors Ensembles feature the top student musicians from Connecticut, Delaware, Maine, Maryland, Massachusetts, New Hampshire, New Jersey, New York, Pennsylvania, Rhode Island, Vermont, and the District of Columbia. To be considered for these performing groups, musicians must have been selected to perform in their respective state’s All-State Festival or the All-National Festival; be a current member of their school’s instrumental ensemble; and receive an endorsement from their school’s ensemble director.

The Eastern Division Conference is sponsored by the National Association for Music Education (NAfME). This year’s conference, to be held in Rochester from April 13–16, is hosted by the New York State School Music Educators Association (NYSSMA).